On the morning of 24 May 2017, ten Rural Land Users were brutally murdered during an operation carried out by civil and military police inside Santa Lúcia farm. The police claimed they were complying with court orders to clear the area. Among the dead was Jane Julia de Oliveira, the community leader of the settlement. In January 2021, land rights defender Fernando dos Santos Araújo, a key witness and survivor of a 2017 massacre, was found shot dead in his home in Pará state. He had testified in the criminal probe into the police killings of ten workers occupying land in Pau D’Arco in 2017. 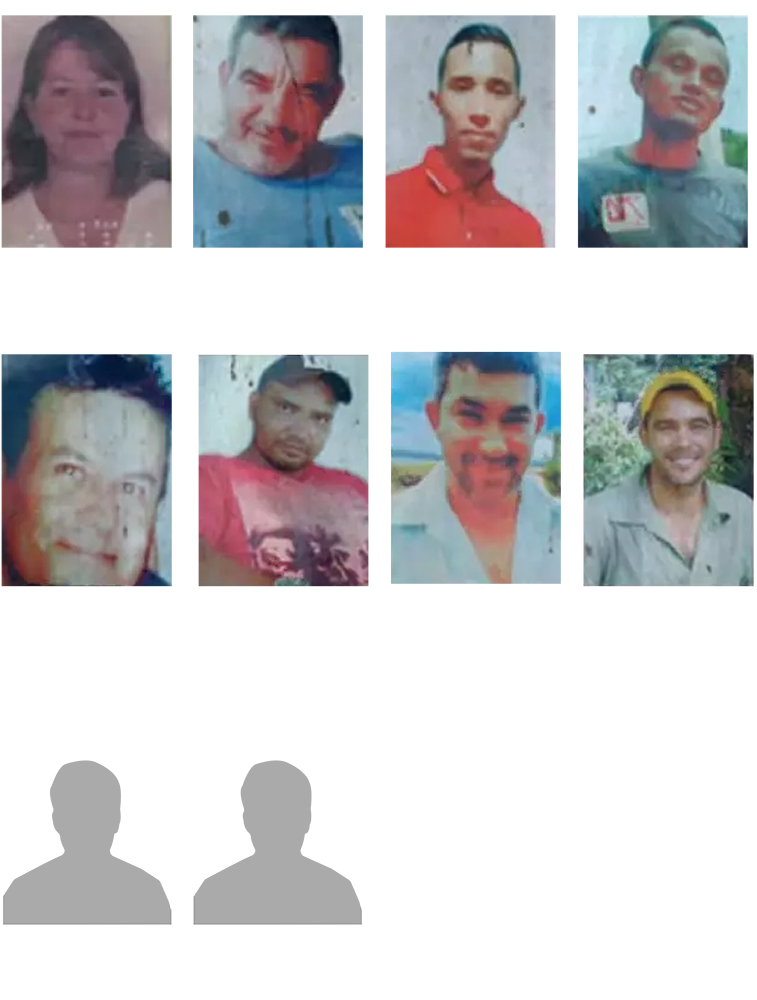 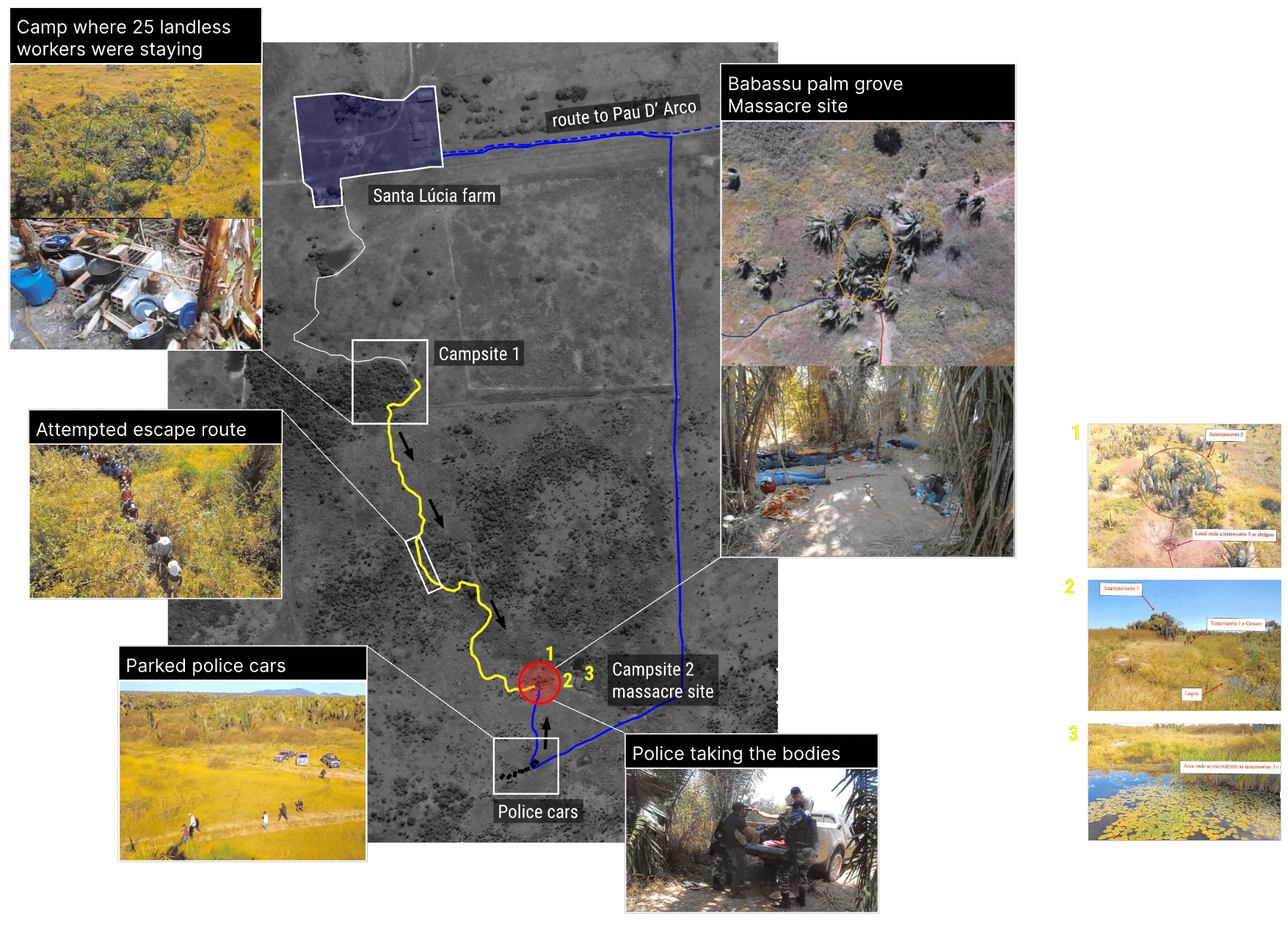 According to survivors, the police shot dead the unarmed men and women as they tried to take shelter and hide in the rain. We created an audio-visual timeline of the events using aural testimonies from a survivor currently living under a witness protection program, accounts of the night of the attack as recalled by Manoel Ferreira, a community leader who in turn speaks on behalf of the murdered Fernando dos Santos Araújo, and forensic photographs used as evidence in the legal case. We anonymized the survivor’s voice to protect her identity. 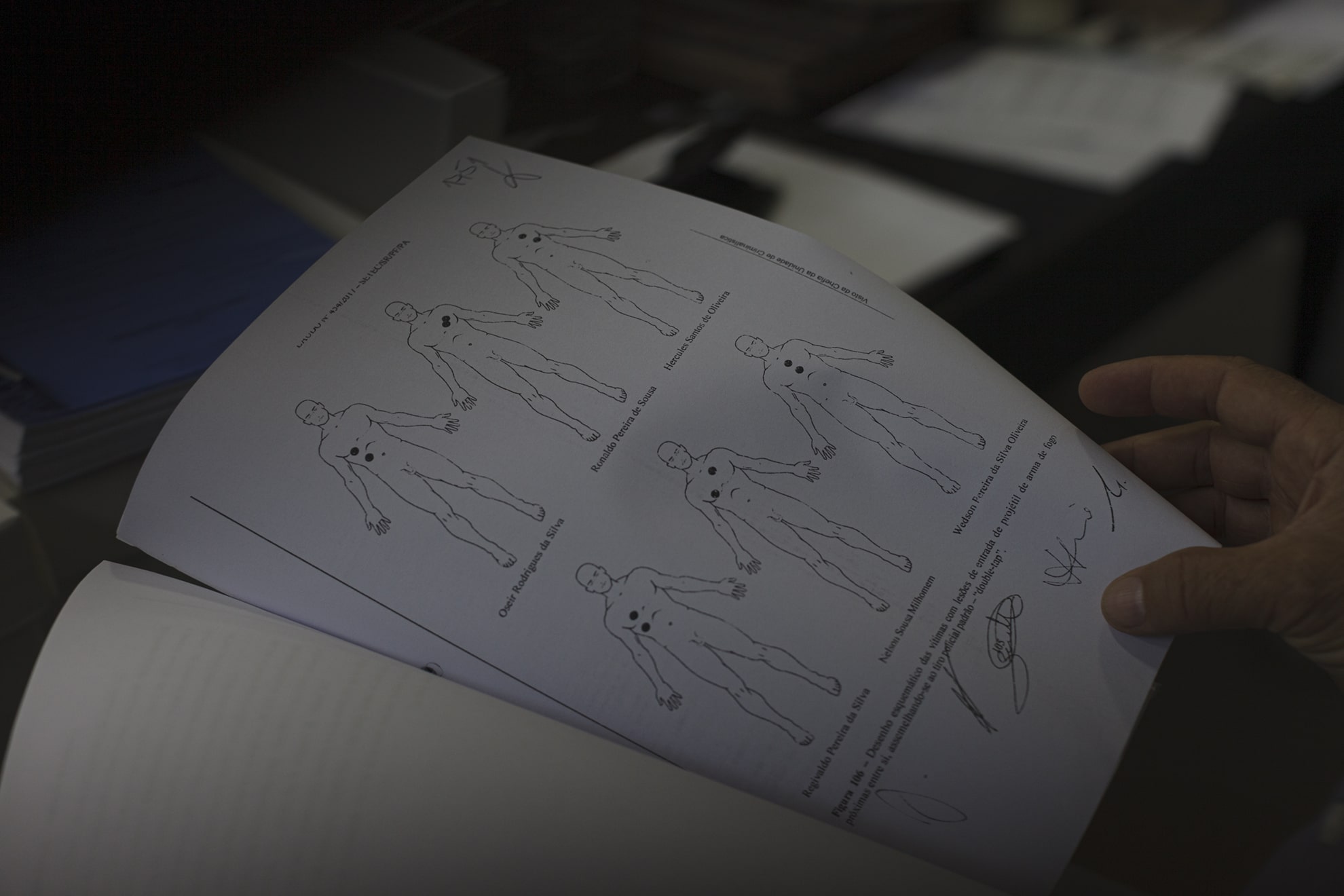 Forensic body diagram of the shots fired at the landless workers. The bullet wounds identified on the corpses are compatible with the ‘double-tap’ pattern, a shooting technique commonly used by the Brazilian police.

According to the forensic firearm examination, the bullets found in at least three corpses match the guns issued to two of the police officers who were part of the 2017 operation in Santa Lucia farm.

13 police officers (nine military police and four civil police officers) were charged by the Public Prosecutor's Office for allegedly committing the crimes of homicide, torture, criminal association and procedural fraud in relation to the Pau D’arco massacre. A criminal case was initiated, the officers were temporarily arrested but later released.

After almost five years, the case was closed. The alleged perpetrators were released by the judicial authorities and continue to work as police officers. The investigation on the masterminds behind the massacre was considered inconclusive.

The bodies of the landless workers are moved by police officers, in a crime scene reenactment by the Federal Police.

The morgue in Redenção where the dead bodies were handed over to the victims’ families in an inhumane manner more than 30 hours after the massacre.

On July 7 2017, just 40 days after the Pau D’arco massacre, Rosenildo Pereira de Almeida, one of the leaders of the Santa Lúcia settlement, was murdered by unknown attackers. The Rural Land User and Defender was killed after receiving numerous threats.

On 26 January 2021, Fernando dos Santos Araújo, a survivor to the Pau D’arco massacre, was murdered in his home inside the Santa Lúcia Farm in Pau D'Arco. The land rights defender was a key witness in the Pau D’arco criminal case.